BAGEL THE BEST EVERYTHING BAGEL 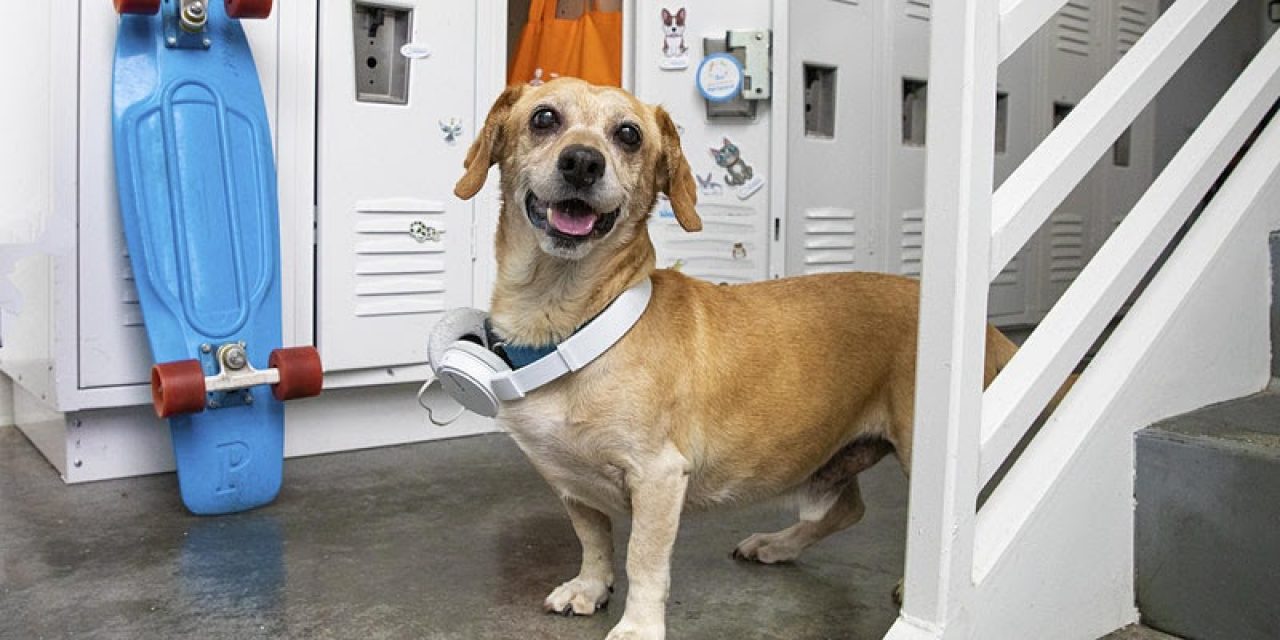 Some of you may have known that I’ve been looking for a dog for 1+ years (basically as soon as we moved back to LA and found an apartment) Although my family bought Teddy online when I was 16 years old and I love him, I realized that adopting a short-haired dog was probably a better idea than just getting another shih tzu or some other type of long-haired dog. I’ve realized over the years especially after dating O, that there are so many dogs out there – in shelters and apparently adoption centers. While I thought all the “good dogs” were taken into owners from COVID, I spent more of the half year more seriously looking through petfinder.com. Which is where back in October, I found Bagel.

Bagel isn’t necessarily the corgi dachshund mix I was obsessively searching for; he’s probably more like a corgi dachshund beagle. (I think?) but he completely fulfilled our criteria: calm, quiet, and actually not just good, but great with kids. While he isn’t totally quiet- he grunts and softly snores while cuddling with us that it’s adorable. While O and I were concerned with how he’d adapt to our home (we have several stairs, while he has bilateral osteoarthritis, a tumor removed from his forehead, and continuous gunk in his eyes due to eye surgery that didn’t give enough of his eyelid back) With that, the adoption center I went to told me that he had to have 2 eyedrops inserted twice a day for the rest of his life unless a vet stated otherwise. With my elderly dad living with us, my pregnancy, we were concerned us if we were compatible and the right fit for Bagel.

Out of all the dogs I’ve scrolled through and inquired about, Bagel was the only one that I went out to meet in person (and a mere 8 min. drive away) When I walked in, I was blown away by how clean, professional, and fancy the center was: huge, interactive digital boards with dog/cat portraits and bios by their private rooms. Here’s how the process and everything went: 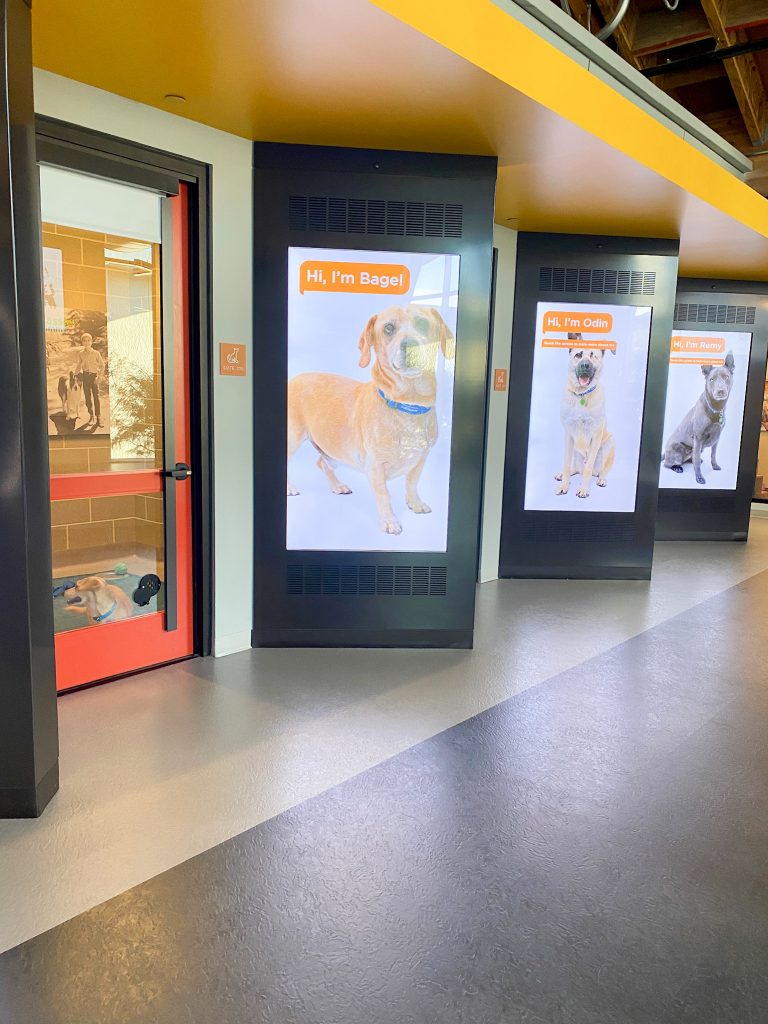 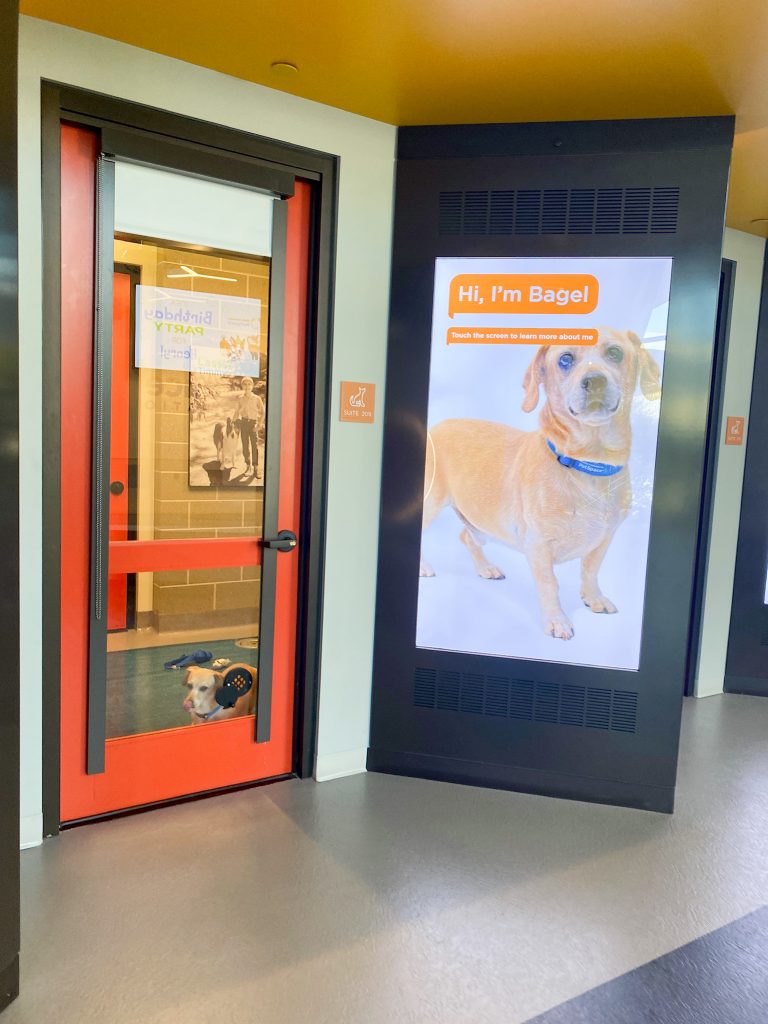 I visited Bagel at the Wallis Annenberg Petspace as soon as I could and for the first time by myself. Since some shelters/adoption centers varied with COVID rules and were closed, I emailed them days in advance to make sure I could come in – and emailed again the morning of for me to come by around 2-3PM. To control the traffic + visitors, they made sure I was there to adopt and not just play with their adoptable pets.

I can’t speak for parents who visit adoption centers to adopt children, but I felt a sweet sense of awe when other girls were admiring him from his window, saying they wish they could have him. I admired him from his glass window for how he was cuter and more lovable in person and became giddier as an Annenberg staff member walked Bagel out on a leash for me to meet him by the benches. I sat across from her while watching how she was feeding him snacks (and staff repeatedly saying he needed cream cheese) and learned that he didn’t have any particular traumas or serious injuries, was hand-selected from a shelter, and that he visited the boys/girls club while remaining calm when children played with him. As an added bonus, she told me that the adoption process was quick and straightforward all felt too good to be true to me. When I finished meeting Bagel, there was a rush of excitement to just immediately adopt him but also a sense of responsibility as a wife/partner/caretaker that my husband should meet him as well before we adopt a family addition. 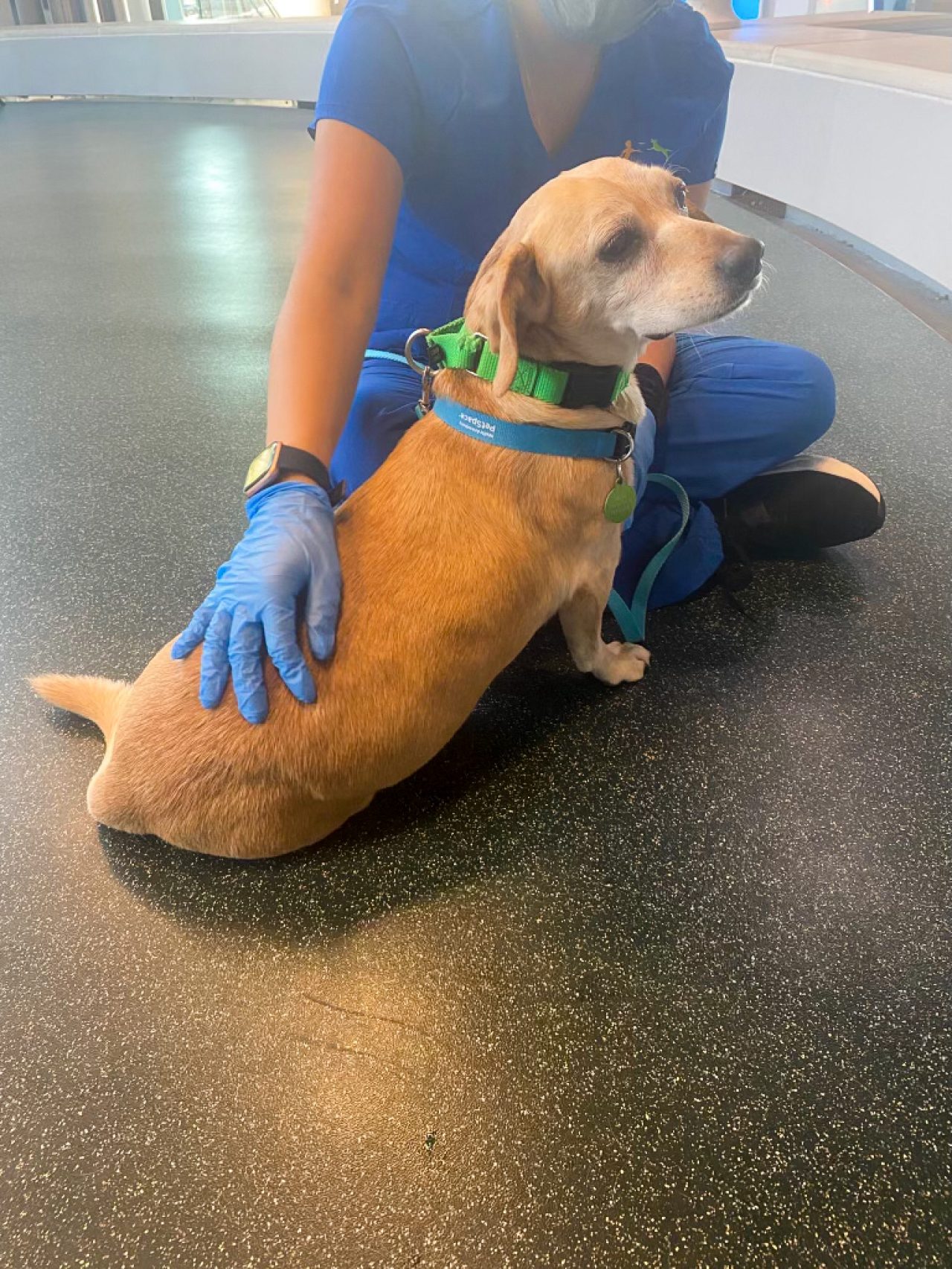 One week later O and I decided that he and our family dog, Ebo, meet Bagel in person to at least see how compatible he was to make sure we could all get along. We all met together in the meet and greet yard and were happy that while they weren’t necessarily playing with each other so much, they were at least amicable (Ebo is one of the least playful/sociable dogs) As if it were too good to be true and we were just going to adopt Bagel, the on-site trainer noticed that Bagel was limping on his left front leg as we walked back inside – and with that, held him from adoption to get it scanned and reviewed. I was crying more inside after reading their update later that he was diagnosed with chronic bilateral osteoarthritis and I was also thrown off that we had to wait until we come back from our baby honeymoon to make any decision, but I figured some of the best decisions were to be taken with a lot more logical reason than just impulse. (Like, what about the dog himself?)  I figured that I had to leave it up to fate for us to see if Bagel was still available for us to adopt right after we returned from our baby honeymoon in November.

Two days after we returned from our baby honeymoon, we attempted to reunite with Bagel again to see how he was doing in real life (and adopt him if he was) I was horrified with selfishness (secretly heartbroken + jealous) to learn that he was actually meeting with another potential adopter. I was so sure that we were the “only” prospective adopters (naive and greedy, I know) Fortunately, although the potential adopters were seriously going to adopt him, the staff encouraged us to talk it through and the couple told us that they’d be happy to take him in if Bagel doesn’t work out with us and that he had to go to Stanford. I was heavily relieved and thankful. Within a few minutes, I  listened to the Vet explain his medical conditions, exchanged more questions and answers, paid the $100 adoption fee (much better for our pocket compared to a puppy or some purebred dog), signed all the paperwork under my name, and left with Bagel’s leash within half an hour.

Coincidentally, we made it in time for Adopt a Senior Pet Month. Although Bagel was fine walking with us out of the adoption center, he was understandably trembling in fear in our car ride back to our home (think of being taken by complete strangers) ..yet with some more rubs, trust, patience, all of our lives were changed. This marked our newest family tradition: Bagel’s Bagel Day, where we celebrate Bagel and enjoy bagels together. 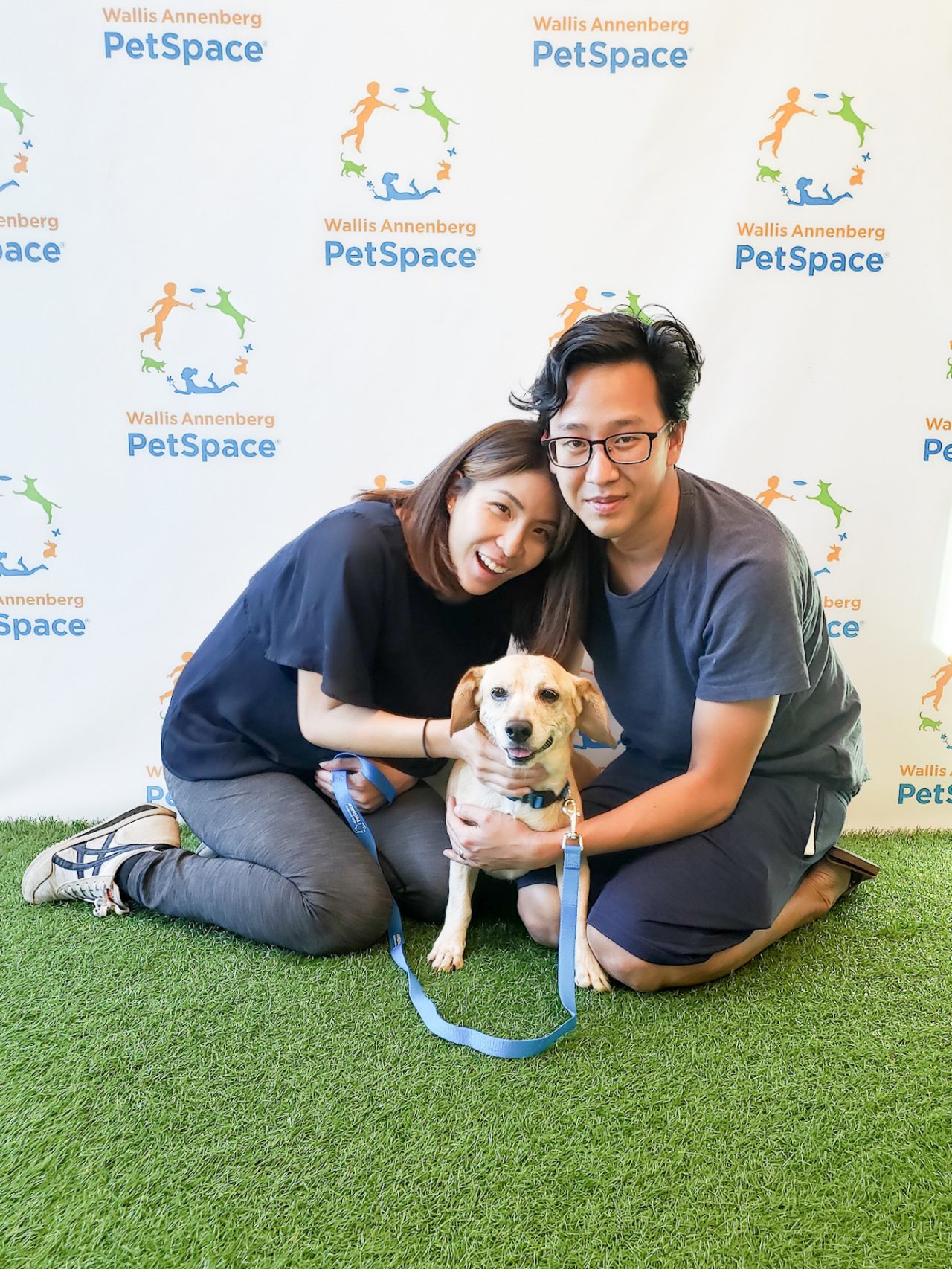 Later that evening, we also had Johnny + Josefina over to spend a few nights at our home – who we decided to take out for a quick taco street run. I don’t think I’ll ever get over this as one of my first photos of Bagel. 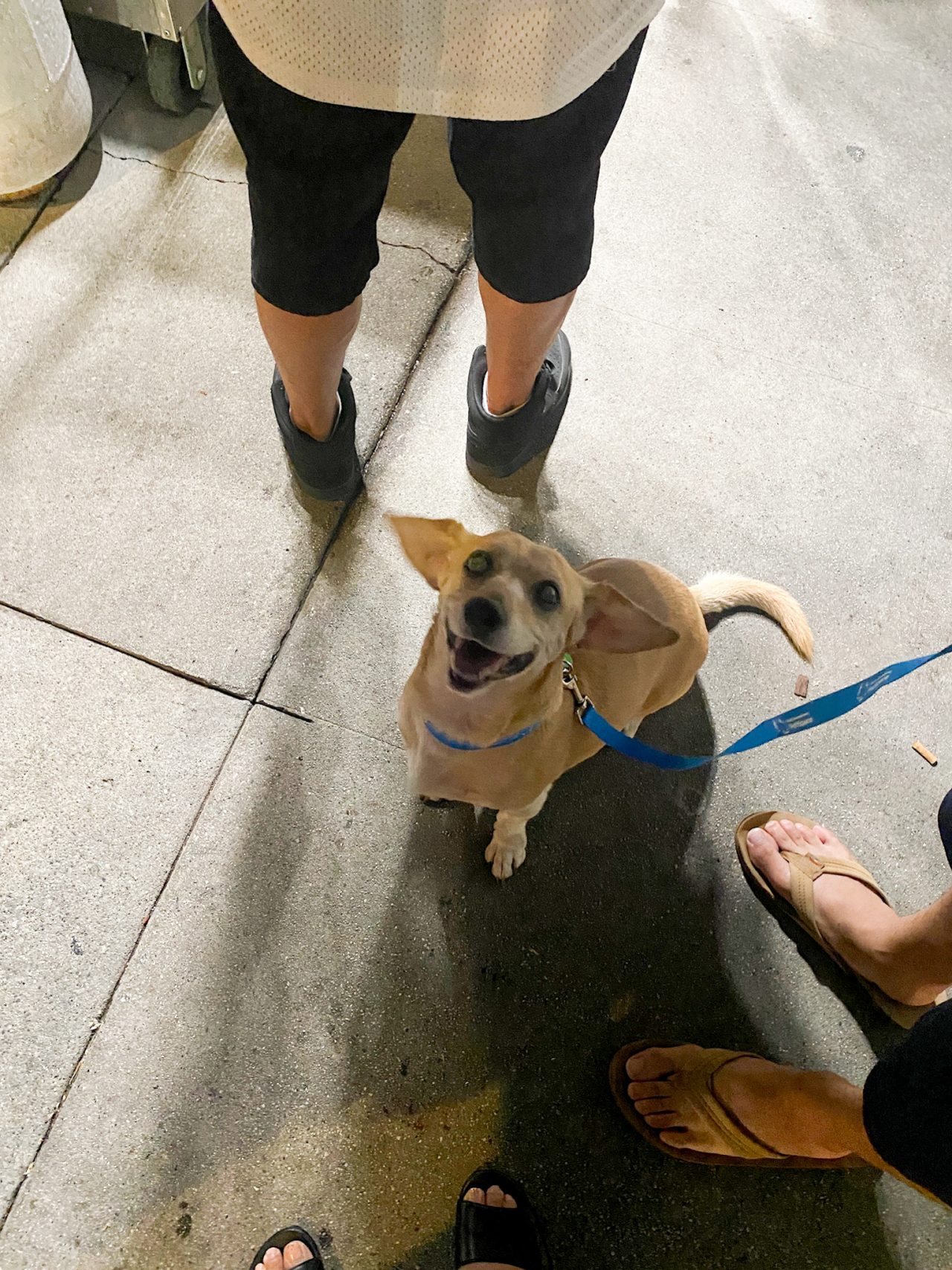 And, we learned that he was fine with water and showers and a little shy but curious in the kitchen. 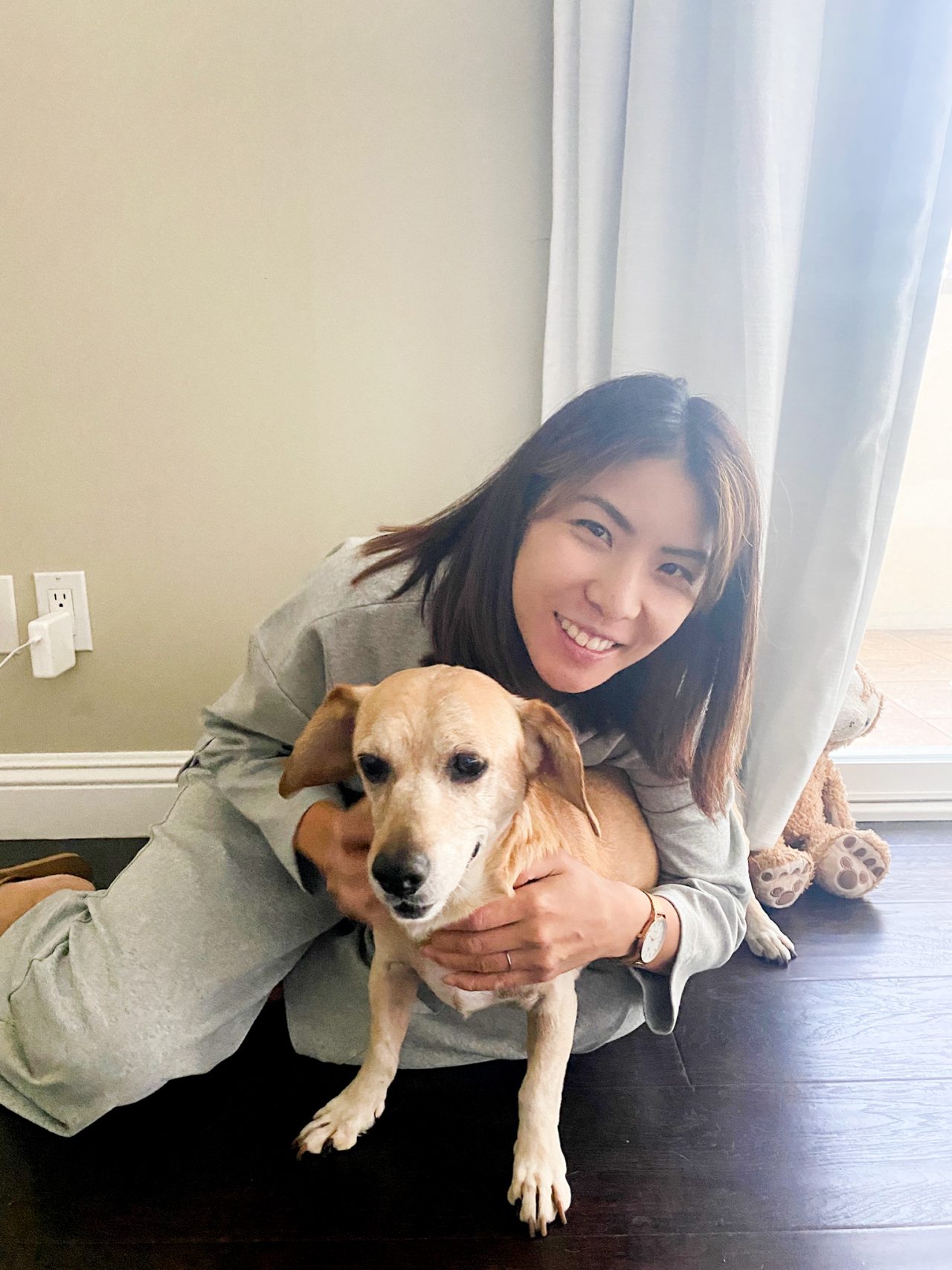 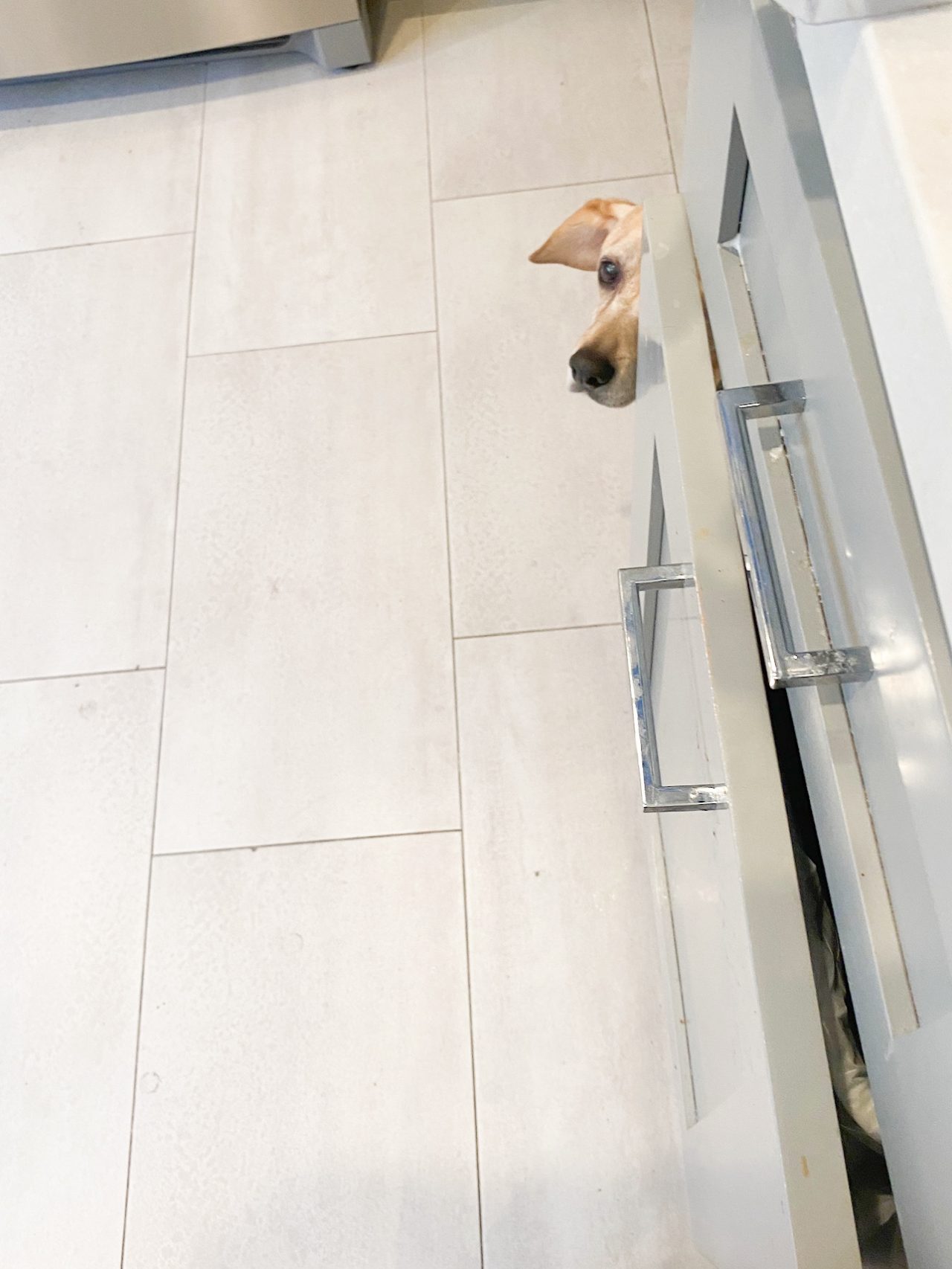 While I’ve read and heard of several stories of older pets having trouble transitioning into new homes and new owners, within one night Bagel was receptive and cuddled with us in front of the TV and slept with us in our bed; Yes, I sleep better, walk more, and am overall in a better mood during my first pregnancy during this neverending pandemic. I have so many reasons to be comfortable at home – resting, working, stretching, preparing food like Thanksgiving and Christmas together.  He has cuddled with me in times of abdominal pregnancy pain + fatigue, comforted me in times of any stress, allowed even babies/children to practically corner him and bite his ears, encouraged me to walk more even with his bilateral osteoarthritis. He’s been enthusiastically climbing up and down the stairs and his eye issues have practically healed (no meds-Thank you Wallis Annenberg Petspace for taking such good care of him) O and I haven’t been happier and more pleased to have Bagel within our family. 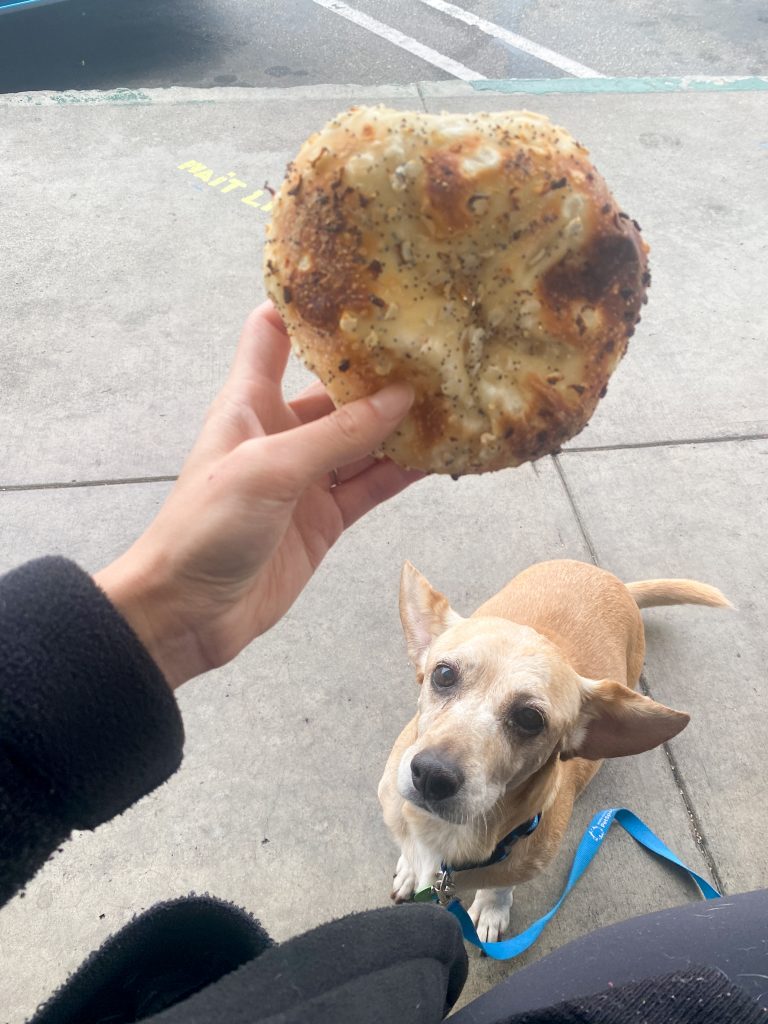 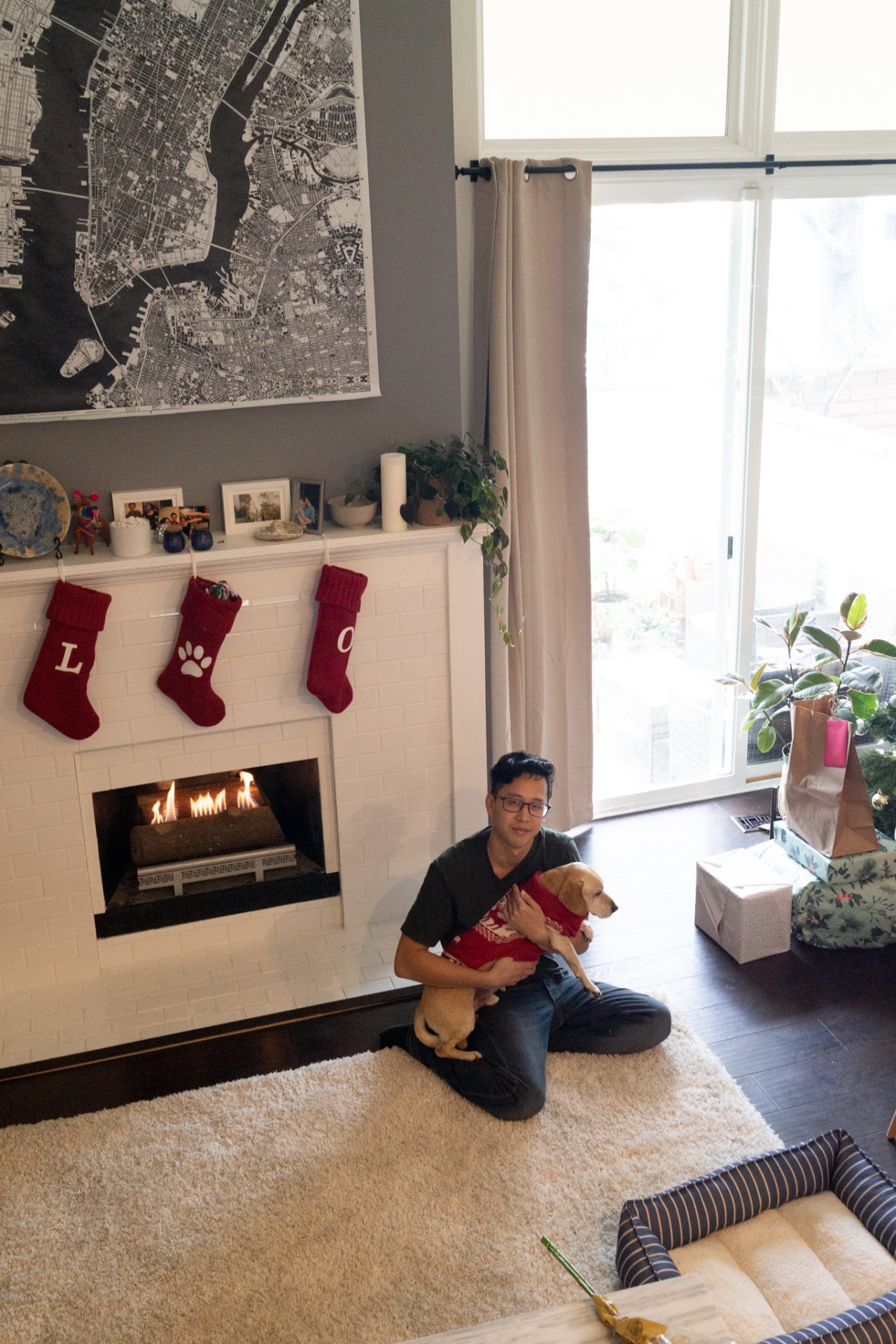 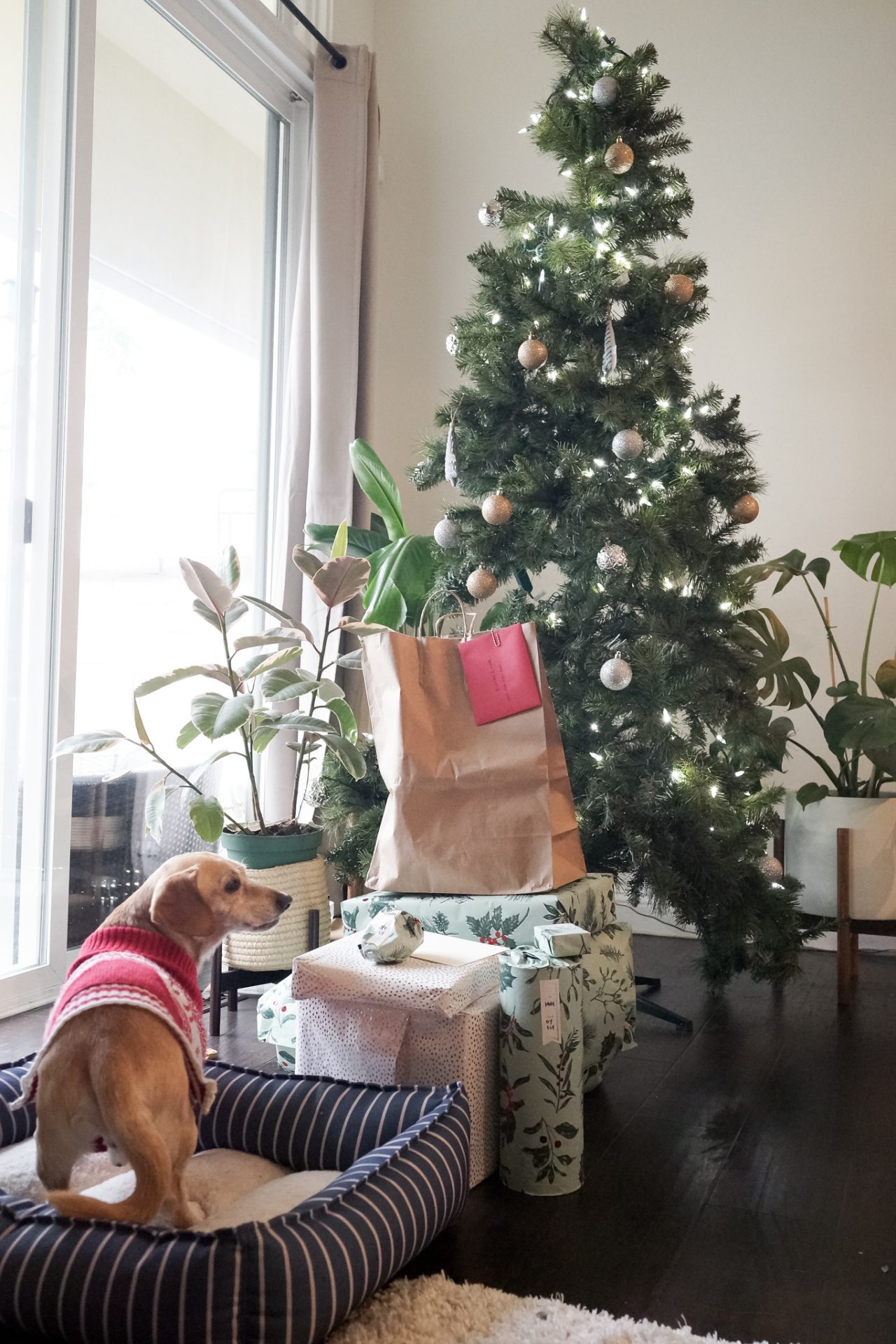 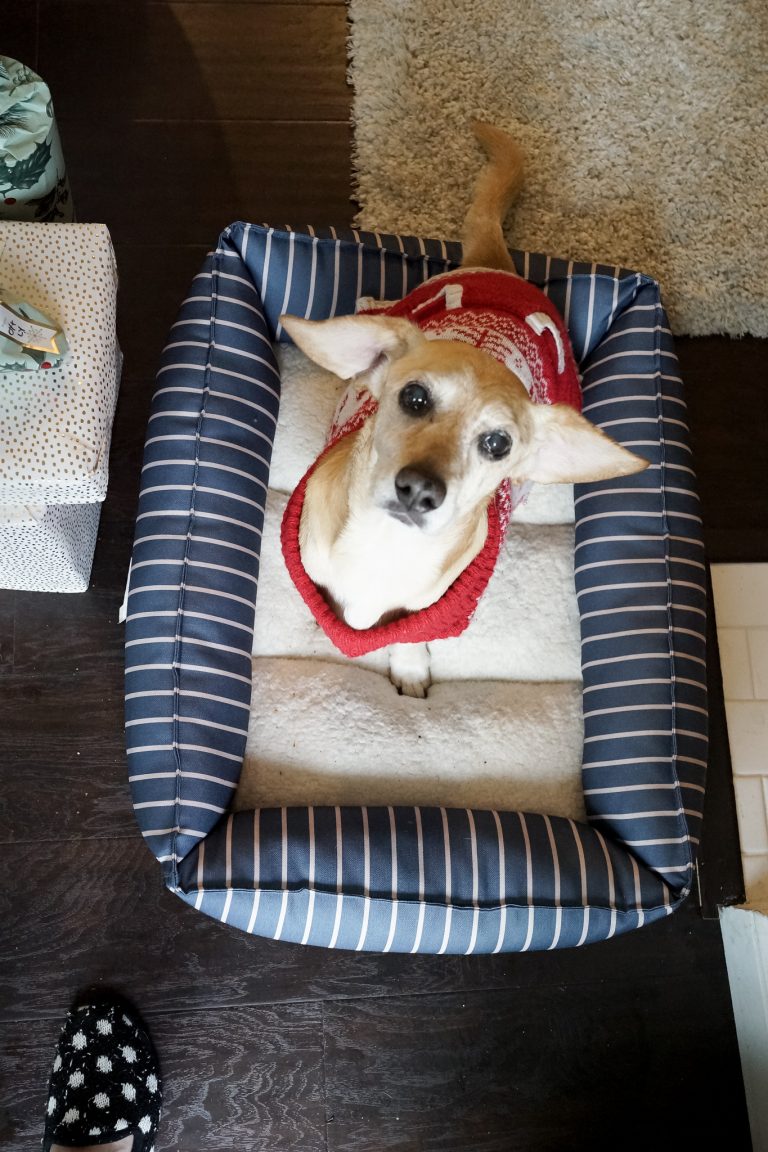 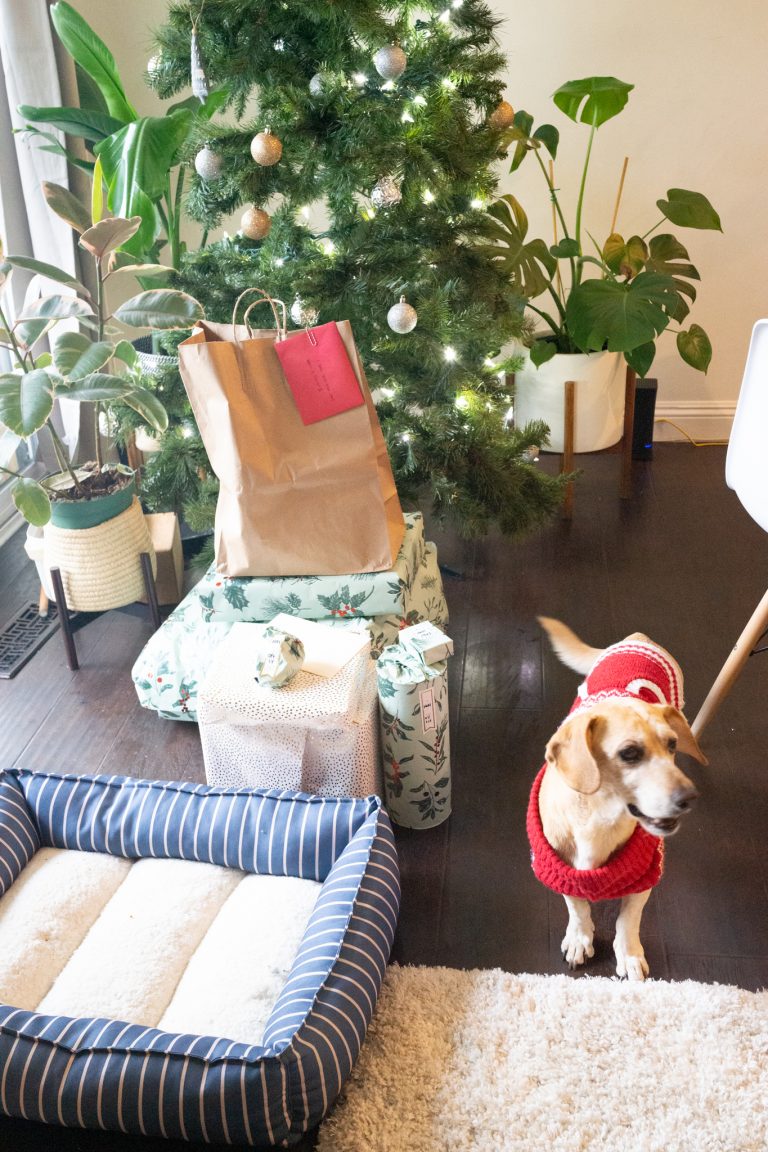 I’m relieved to see how the years have progressed so much more care for animals in general – and especially dog adoptions rather than puppy mills. I also didn’t realize how many people would just seek out puppies over the old dogs; according to ASPCA,  about 390,000 dogs and 530,000 cats are euthanized every year. Adoption clearly is a reason why it’s been declining (and microchips/pets being successfully returned to their owners) Although I thought I’d just want a puppy or young dog to grow up with our upcoming son, there were so many reasons for why a senior was a great idea: 1) they’re “potty trained”, 2) calmer 3) more easily trainable 4) won’t chew up our furniture in our home. It’s been a wonderful adopt a senior pet month + end of the year – and I hope more prospective dog owners consider fostering and adopting the elder dogs as well. 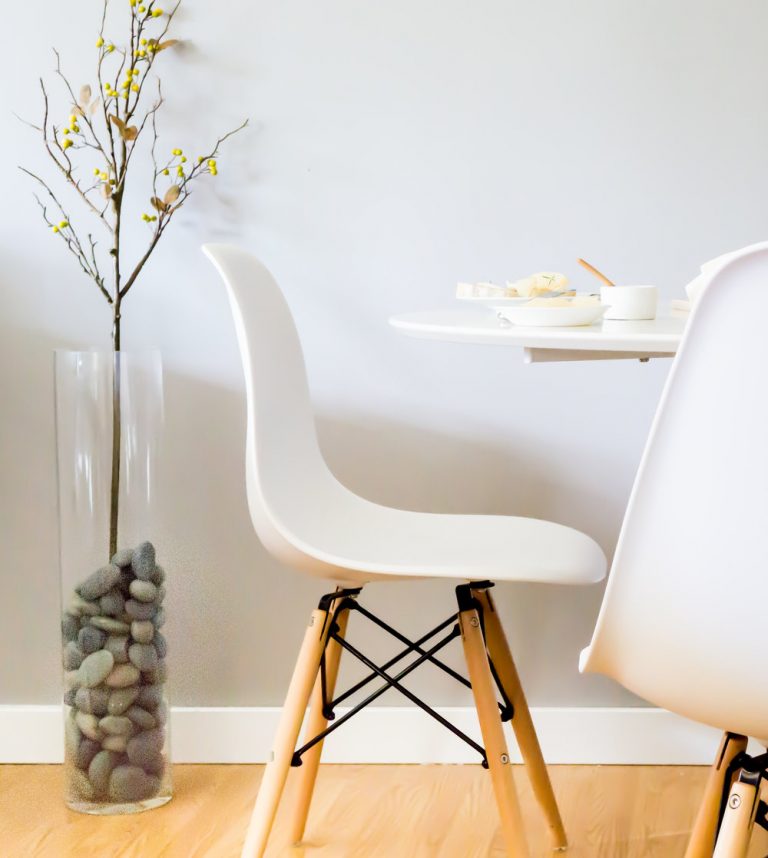 HOME BEFORE THE HOLIDAYS

INTERVIEW WITH MARU COFFEE
Previous Article
TAKE ME BACK TO...
Next Article